C4SSA’s President Dr. Bakr Ghbeis opened the event with poignant and heartful remarks, noting that the voice of the Syrian people has been silenced by Bashar Al-Assad and as such, it is the Syrian-American diaspora that speaks for the Syrian people. “We speak for the Syrian people,” Ghbeis said, a point he eloquently laid out in an opinion piece he wrote for the National Interest.

“We will not stop working on behalf of our homeland until she is free.” Millions of Syrians have been displaced, both internally and as refugees, because of Assad’s war on his own people. He noted that in order to maintain his power, Assad “has killed, imprisoned, tortured, displaced millions of Syrians… the effects of his actions have spread beyond Syria to her neighbors.” Ghbeis noted that “the diplomatic track to a political transition in Syria and a new day remains hostage to the regime and its enablers. We know who they are. To counter this, however, we must work to stabilize and secure those areas of Syria that are not in the regime’s control: One family, one community, one town at a time. This is the way to take Syria back, I believe, to turn back the injustice, oppression, ethnic cleansing and demographic changes brought on by the regime and its supporters.” Northeast Syria is an example of a region where stabilization efforts were successful; a point Dr. Ghbeis made during his speech while asking for help from the Biden administration and its supporters to achieve this. “Without doubt, what is occurring in Syria is a genocide and it must come to an end after a decade of endless pain and suffering of the Syrian people.
​
Deputy Assistant Secretary for Levant Affairs in the Bureau for Near Eastern Affairs Aimee Cutrona addressed the audience as well. Her remarks provided hope for those in attendance that the Syrian people are not forgotten by the Biden administration and that they are committed to finding a solution and hopeful end to the conflict there.

“The US government continues to work with partners toward a political solution in Syria. The United States believes that stability in Syria – and the greater region – can only be achieved through a political process that represents the will of all Syrians. And we are committed to working with allies, partners and of course the UN to ensure that a durable political solution remains within reach. The United States is also deeply concerned about the humanitarian situation and committed to helping lead the humanitarian response in Syria. The current needs for humanitarian assistance are dire and providing humanitarian assistance to Syria is one of this administration’s top priorities,” Cutrona said. 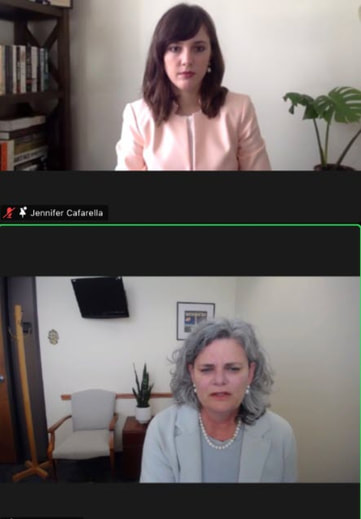 She noted the administration’s work to defeat ISIS and also addressed the issue of internally displaced persons (IDPs) and how defeating ISIS was intrinsic to seeing IDPs return to Syria. Cutrona also condemned the use of chemical weapons against the Syrian people.
“The United States remains committed to standing with Syrian survivors of the Assad regime’s atrocities, some of which rise to the level of war crimes and crimes against humanity as we promote accountability for the Assad regime’s crimes.” She noted there are at least over 100,000 missing Syrians, including children among them.

“I want to be clear: no amount of disinformation or conspiracy theories or distortion of the facts by the regime or its enablers can argue away Assad’s crimes.” Cutrona added, “the United States is committed to supporting the Syrian people and a peaceful resolution to the conflict that represents the will of all Syrians.”

Senator Menendez, Chairman of the Senate Foreign Relations Committee, provided a letter to C4SSA expressing his unwavering “support and admiration” for C4SSA’s cause. He “Bashar Al-Assad, backed by his Iranian and Russian enablers, has fomented a reign of fear, repression and torture against his own citizens. He has not only cooperated with terrorists to incite violence, he has murdered innocent civilians in cold blood and barbarously bombed hospitals and medical workers to prevent them from providing relief.”

Menendez added, “I look forward to continuing to work with you on behalf of the people of Syria to ensure the Assad regime, their enablers, and other human rights violators in Syria are held accountable and that the Syrian people see justice done in their names.”

​Senator Jim Risch (R-ID), ranking member of the Senate Foreign Relations Committee, noted that “the Biden administration has a unique opportunity to correct the mistakes of the past,” referring to America’s lack of action against Assad when he used chemical weapons against the Syrian people. 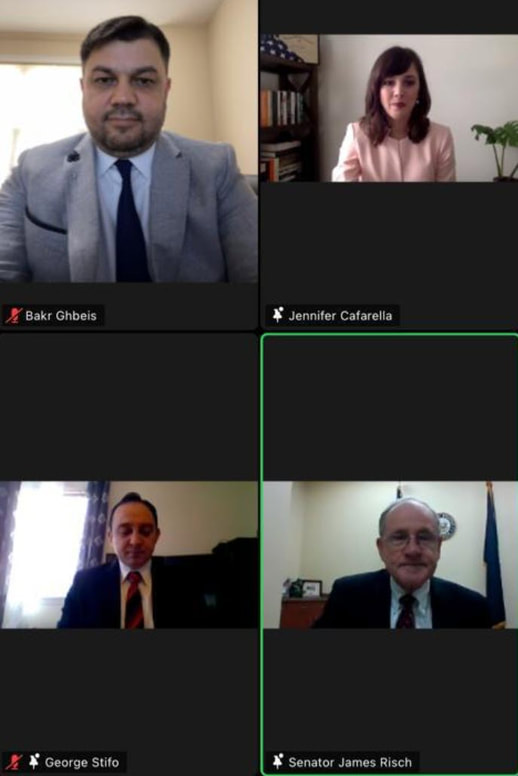 Risch was proud to champion the Caesar Civilian Act which authorized sanctions against the Assad regime and its backers. “This important work must continue, and we remain committed to seeking accountability for the regime’s atrocities.”

Cafarella noted that Assad intends to hold a sham presidential election next month and that the United States has rightly noted that this election will be neither free nor fair.
​
Congressman Joe Wilson (R-SC), who serves on the House Foreign Affairs Committee, cited part of a speech delivered by former Obama appointed Ambassador Robert Ford who stated that US taxpayer dollars should not go to UN entities in Syria that have been co-opted by the Assad regime. The Assad regime is well documented as having stolen humanitarian aid meant for the Syrian people and using it to enrich his inner circle and those who support his nefarious reign. Wilson noted, “There is no solution to the ongoing crisis that involves the illegitimate Assad regime remaining in power. Atrocities should not be rewarded or forgotten.”

The conference was a testament to the bipartisan efforts to see an end to the Syrian people’s strife and to create a path for stabilization in Syria.

On Thursday, President Joe Biden released a strong statement condemning the Assad regime’s “brutality and repression of the Syrian people, who have called for freedom and a representative government” and continuing “the national emergency declared in Executive Order 13338 with respect to the actions of the Government of Syria.” Biden added, “the United States condemns the Assad regime’s, and its Russian and Iranian enablers’, brutal violence and human rights violations and abuses.” He ended his statement by saying, “the United States will consider changes in policies and actions of the Government of Syria in determining whether to continue or terminate this national emergency in the future.” This effectively continues the sanctions that have already been implemented on Syria. History has proven that sanctions work. It remains to be seen how this executive order can function within the framework of a stabilization plan for the Syrian people.